The Dietrich Group | A response to the media for This Is a Costume Drama
21769
post-template-default,single,single-post,postid-21769,single-format-standard,give-test-mode,give-page,ajax_fade,page_not_loaded,,select-theme-ver-1.5,wpb-js-composer js-comp-ver-4.3.4,vc_responsive
November 26, 2015 In News

A response to the media for This Is a Costume Drama

THIS IS A COSTUME DRAMA, my inundation project exploring play and plays’ relationship to adults, has taken the leap with an audience. Last week we premiered the work as part of Harbourfront’s World Stage season. This engagement with an audience was a pivotal time in the development of the work. As dance rarely gets the chance to grow through a series of previews, we took this period of performances to absorb the work even further. We weren’t just in the theatre celebrating our show … we worked non stop during the small four day run to analyze, sculpt and edit, continuing to shape the landscape and activities to bring out themes and voices clearly. I am tackling big subjects here and on a rather massive scale.

What an offering this intense creative period has been. I cannot express how much growth it has asked for us as a company and for myself as a creator and director, as the work continues to grow and develop.

The critics have implied that my work is both nihilistic and motivated by the trivial intention of being provocative. Much has been said in particular about the nudity and sexuality in the work. I must express in no way do I see sexuality as silly, stupid or frivolous. It lies at the heart of my explorations and in this work sexuality lightheartedly (which is very new for me) explores the body, gender, and power in ways that persistently poke at how uptight we can be as a society. It speaks to how coated we are in religious morality and how consistently we negate fundamental aspects of wrongdoing throughout history as we meander as a minor species. Can adults play without being bombarded and gridlocked by old associations and perspectives? Is there such thing as a trust ~ trust that is integral to the kind of play that supports and fuels our existence? What is on the other side of these explorations?

This is a pivotal time creatively in Toronto. As an artist who has made this my home for the past three decades, I find it fascinating that conservatism has such a prominent influence on the evolution of the arts in the city. Toronto is no longer only legitimized through the maturity of its Opera and Ballet. In regards to my work being presented one critic was impertinent to belittle not just it but the producers and the audience as well. The existence of an ‘artistic establishment’, or should I say members of a generation that hold tight to a reality fueling little growth, remind me of what the arts are up against. How obvious and sad that fear continues to hinder artistic evolution.

Am I nihilistic? Hhhmmmm …I am in question of meaning within all of this life, always seeking out glimmers of hope for vital survival. I think this is a place where many of us live. These are the explorations within THIS IS A COSTUME DRAMA. I have a team that sits beside me supportively as we gauge this play with all its meaning. 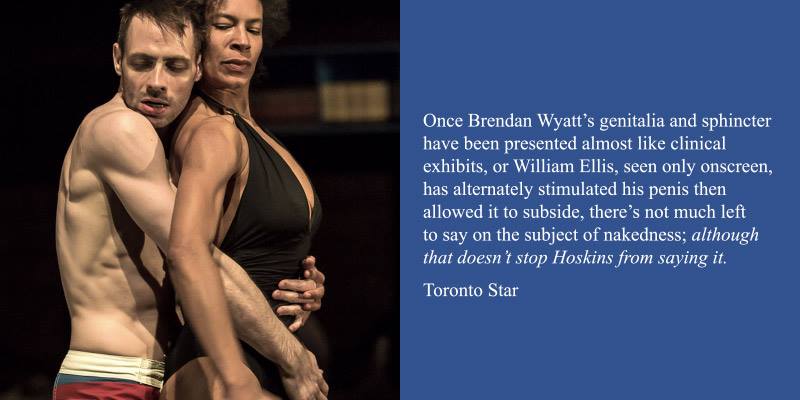